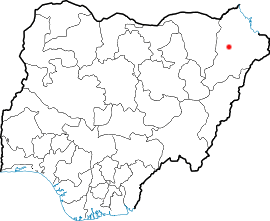 A spot of bother in Maiduguri district, Nigeria (Source: Wikimedia)

Worldwide, in all but three of 155 countries, the trivalent oral polio vaccine has been replaced with bivalent oral vaccine. The bivalent formulation includes only attenuated versions of type 1 and 3 of poliovirus. The type 2 component has been dropped because, far more than the other types, it sometimes mutates back into virulent form. Also, type 2 polio was eradicated in 1999.

But just as the world moved to the bivalent vaccine, Nigeria reported finding a type 2 vaccine-derived virus in a sewage sample. Consequently, right on the heels of the vaccine switch, the type 2 vaccine is being immediately pressed back into service, although it will be used by itself, in monovalent form, according to the Global Polio Eradication Initiative.

Sequencing indicates the Nigerian virus has been circulating undetected since May of 2014. The sample comes from Maidaguri district, an area contested by government forces and Boko Horam, making vaccination problematic.

Last September, WHO removed Nigeria from the list of polio-endemic countries. However, the CDC continued to advise that US travelers to Nigeria be immunized against polio.

There are now multiple hotspots. Besides Nigeria, according to the CDC's Steve Wassilak, "We consider [the] Guinea and Myanmar outbreaks still active." In addition, Brazil reported what researchers described as a "highly evolved" type 2 vaccine-derived virus found in sea water off São Paulo. Found in January 2014, sequencing indicates the virus has been circulating undetected for eight years. Brazil has very high population immunity to polio, so this virus likely came from somewhere else, according to Wassilak.

Eight years of undetected circulation suggests a perhaps large and as yet undiscovered surveillance gap somewhere in the world. Asked whether eight years set the record for undetected circulation, Wassilak answered: "Nigeria had documented circulation for 10 years." However, in Nigeria, there were multiple transmission chains, and it is not clear from Wassilak's answer if any one chain circulated eight years. The Brazilian isolate also had mutations at antigenic sites, suggesting possible evolution of resistance. However, researchers reported that type 2 antibodies still killed the virus.

The process of switching to the bivalent formulation also risks creating new type 2 vaccine derived virus. The switch was synchronized globally because if use of the trivalent vaccine continues anywhere, it might potentially infect children who have only been immunized with the bivalent vaccine. According to WHO:

"The primary risk associated with the cessation of use of type 2 OPV [oral polio vaccine] is the re-introduction of disease-causing type 2 poliovirus into a population with increasing susceptibility to type 2 poliovirus. The switch from tOPV to bOPV must therefore be globally synchronized to minimize the risk of new cVDPV type 2 emergence."

The precision of the large and un-rehearsable switch remains to be seen. Globally, susceptibility to type 2 vaccine derived virus is now rising given the switch to bivalent vaccine and the slow (and arguably belated) introduction of the injected vaccine, which includes all three virus types in a form in which mutation is not possible. Also, while the injected vaccine protects against paralysis caused by poliovirus, it does not prevent infection nor halt transmission. Polio circulated in Israel without causing any cases of paralysis because coverage with the injected vaccine was so high. Eventually, however, circulation might find someone missed by vaccination or with a compromised immune system, resulting in polio's hallmark acute flaccid paralysis.

The success in beating back wild poliovirus bodes well for the eradication effort to also smash outbreaks from vaccine-derived virus. But, out of the gate in the post-trivalent world, the race is already on. And, in Nigeria at least, type 2 vaccine-derived virus circulation has gone uninterrupted for a decade.