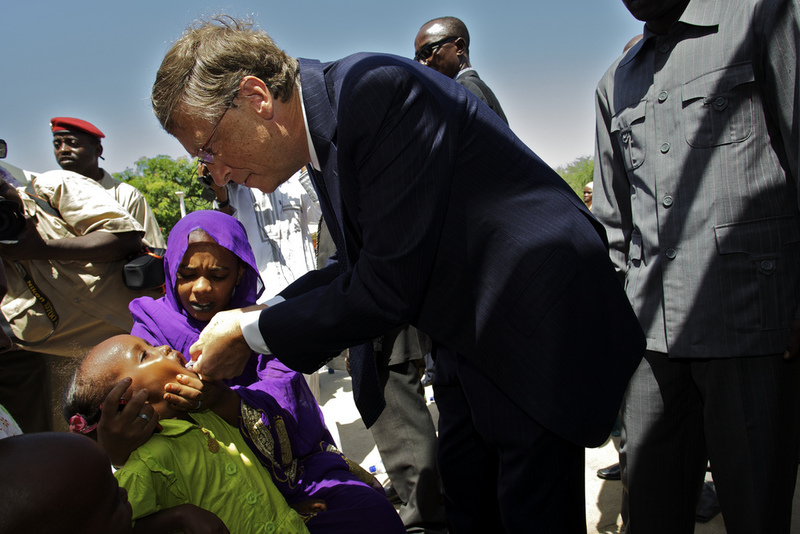 Thanks to oral polio vaccine, the world has nearly extirpated a crippling disease from the planet. In rare instances, however, the same vaccine can cause polio. With progress in eradication, vaccine-associated cases of paralysis began to surpass cases caused by the disease in 2012. A switch in oral vaccines next year might increase vaccine-induced paralytic polio. An inactivated version of the vaccine is available that cannot cause polio and can prevent the polio that infrequently results from the oral vaccine. However, the inactivated formulation is only now being rolled out and not in a way that will stop the oral vaccine from sometimes causing paralytic polio.

Schedule and budget appear to be driving polio policy, not minimizing cases of paralysis from all sources, including the oral vaccines.

The last case of paralytic polio in the world might be caused by the live oral vaccine.

A devil's bargain comes into view

The risk of “vaccine-associated paralytic polio” (VAPP) is very low: 3-4 cases per million births, according researchers at the World Health Organization (WHO) and US Centers for Disease Control (CDC). But with so many children immunized with it, the oral vaccine caused an estimated 399 cases of paralysis in 2012 compared to just 223 caused by polio itself. This disparity will only worsen as eradication proceeds. Schedule slips will mean not only more money (perhaps $1 billion a year) but also hundreds more polio cases caused by the oral vaccine.

Mutations in the live vaccine virus can cause not only VAPP but lead to infection of others, just like the wild virus. Madagascar, for example, has recently seen multiple cases of polio from circulating vaccine-derived viruses. Pakistan and Nigeria have also been battling transmission of polio virus that came from the oral vaccine.

As a first step toward complete cessation of live vaccine use, current plans call for the trivalent oral polio vaccine (tOPV) to be withdrawn worldwide next April, replaced by a bivalent vaccine which immunizes against only types 1 and 3 of the poliovirus. (Type 2 appears to be long gone, last seen in India in 1999.) However, the bivalent vaccine could increase VAPP cases.

The data are scant but concerning. Experience in Hungary “suggest a higher rate of VAPP associated with the use of bivalent OPV compared to tOPV," according to researchers at the CDC and WHO, 20 times higher. However, the data are limited, seemingly to one year, 1961.

VAPP risk varies widely depending on context. According to the CDC, the “best data on VAPP” for the monovalent oral polio vaccines “comes from Hungary, where these strains have been used the longest.” In addition, Hungary featured excellent detection and investigation, requiring that every suspected case of poliomyelitis be admitted to a central hospital for clinical and laboratory evaluation. However, these practices only came into full effect in 1966, five years after the 1961 administration of the bivalent vaccine that generated so many cases of VAPP.

Not only Hungary, but Belarus and especially Romania reported unusually high rates of VAPP, as many as one case per 183,000 doses. However, research published in the high-profile New England Journal of Medicine put these concerns to rest, attributing VAPP in Romania largely to “provocation paralysis,” or multiple intramuscular injections administered shortly after oral polio vaccination. However, some of the same researchers subsequently found that in the United States, intramuscular injections did not cause VAPP, results published to less notice in the Pediatric Infectious Diseases Journal.

The dismissal of higher VAPP rates in parts of Eastern Europe, however, still stands. According  to WHO and the CDC: “There is no evidence that the high risk of VAPP observed in these studies is representative of the risk of VAPP in the majority of OPV-using countries globally.”

The type 2 vaccine virus is actually alpha dog, outcompeting both the type 1 and type 3 viruses of the trivalent vaccine when it comes to infecting (usually benignly) the body. Global health authorities expect that dropping type 2 from the vaccine will greatly reduce VAPP: “removal of type 2 serotype from OPV provided globally in routine immunization and campaigns could decrease the overall risk of VAPP by at least 25%–30%.”

However, just subtracting out the percentage of VAPP cases attributable to the type 2 component of the vaccine might be overly simplistic. The presence or absence of type 2 clearly impacts the effects of type 3 in the body. Leave out type 2 and better protection for type 3 results, for example. The only available evidence—the limited data from Hungary—points to much higher VAPP from bivalent than trivalent vaccine.

Roland Sutter, a scientist at the World Health Organization and co-author of numerous of papers on VAPP, dismissed out of hand that bivalent vaccine might increase VAPP, saying: “I don’t believe anything that hasn’t been proven.” Sutter pointed out that four billion doses of the bivalent vaccine have been administered since 2009 and "no safety signal has been detected anywhere in the world.” He asked: “Wouldn't you see something?"

However, WHO might see no safety signal because WHO doesn’t track VAPP. “The countries are keeping track,” according to Sutter. The bivalent vaccine “does cause VAPP as well," Sutter said, but identifying VAPP cases is technically demanding. “It’s not so easy to go through the algorithms," he explained. And countries, perhaps like WHO, may have little incentive to track and report how many children and adults are being paralyzed by a public health program. Asked if WHO had a spreadsheet aggregating country-level VAPP data, Sutter replied: “Not at all. No.”

In theory, VAPP could be avoided entirely by using the inactivated polio vaccine (IPV). The United States dropped the live oral vaccine in 2000 “to eliminate the risk of vaccine-associated paralytic poliomyelitis (VAPP),” according to the CDC. Most wealthy countries immunize with IPV. But IPV poses a number of problems for eradication.

IPV must be injected, whereas a deluge of oral vaccine drops can be unleashed by armies of untrained vaccinators. The high levels of vaccine coverage needed, over 90%, would be much, much harder to attain if polio eradication relied on national routine immunization programs which can handle injections. The eradication effort opted for oral vaccines and also for a separate, polio-only vaccination infrastructure that actually drew resources away from routine immunization programs.

IPV by itself also likely would not suffice to eradicate polio. The live and inactivated vaccines confer different kinds of immunity. IPV only protects against paralysis from polio, not infection. In 2013, Israel found widespread polio transmission in sewage samples. Because of the country’s high IPV coverage and a little luck, no cases of polio resulted. But polio still circulated. Israel resumed immunizing with OPV while continuing IPV. Because OPV prevents both disease and infection, transmission in Israel soon stopped, demonstrating not only sharp work by scientists and public health officials, but also that eradication with IPV alone may be impossible. On the other hand, the strongest individual and population immunity to polio results from vaccinating with both IPV and OPV.

Another obstacle to universal adoption of IPV has been cost. Until recently, IPV cost about $2 per dose versus $0.10 - 0.15 for the oral vaccine. However, in 2000 when the US switched to IPV, a generous gift from the Bill & Melinda Gates Foundation led to the founding of Gavi. Gavi sought, among other aims, to slash the time it took for a vaccine to get from the rich world to the poor. Thanks to Gavi, relatively expensive vaccines for hepatitis and rotavirus became more quickly available in the developing world—but not IPV. More recently, Gavi began rolling out its most expensive vaccine yet, for Human Papillomavirus (HPV), which can cost more than $100 in developed countries.

The cost of IPV rather than its safety benefits continue to be at the forefront in policymaking decisions. A recent paper from Gates Foundation and CDC researchers stated: “In the global polio eradication end game, the cost of IPV will need to be balanced with effectiveness.”

Gavi’s support for IPV only began in 2013 with the publication of the polio endgame strategy, according to Gavi spokesperson Rob Kelly. Vaccine safety was not the main driver. According to Kelly, "the primary purpose of an IPV dose in Gavi countries is to maintain immunity against type 2 poliovirus," after withdrawal of the trivalent vaccine.

Vaccine schedule and VAPP: out of order

Gavi’s recent support for IPV will have little or no impact on VAPP because the oral vaccine will be administered first. To prevent VAPP, IPV must come before OPV. Brazil moved away from an OPV-only schedule, putting two doses of IPV first with the goal of “preventing rare cases of vaccine-associated paralytic polio” and “ensuring equitable access to IPV,” i.e. not inflicting VAPP on the poor.

However, WHO recommends only a single dose of IPV after the oral vaccine. According to WHO, children will then be older and maternal antibodies less likely to interfere with developing immunity in response to the vaccine. However, the CDC found that coverage with one dose of IPV “is expected to be lowest” when given on WHO’s recommended schedule and highest if given the first time a child is immunized. About 12 million children won’t get IPV if WHO’s plan is followed, according to the CDC.

But nations supported by Gavi will be following WHO guidelines, according to Gavi’s Rob Kelly: “countries have overwhelmingly decided to introduce the IPV dose at 14 weeks of age,” after the oral vaccine. The Gates Foundation supports WHO’s guidelines: “There are valid scientific and economic reasons why most Gavi countries still give OPV before the dose of IPV (generally at 14 weeks),” said foundation spokesperson, Rachel Lonsdale.

The foundation has criticized lags in rolling out vaccines in low-income countries but sees the handling of polio vaccines as similar “to what happened in the US,” according to Lonsdale. “When the risk of OPV is outweighed by the benefit the global program is moving to IPV.” Lonsdale emphasized: “We would not be where we are today and so close to eradication without OPV.”

However, we would be much closer to eradication if there were a genetically stable oral vaccine. Such a vaccine would cause no VAPP and no circulating vaccine-derived virus. There would be no need to rollout the needle-based IPV.

Gates Foundation research into a vaccine with the safety of IPV and the infection-prevention of OPV began in 2011, according Lonsdale. She dates the foundation’s involvement with eradication to 2007 and a $100 million grant to Rotary International. The foundation became the largest financial backer of polio eradication in 2008. Scientists are also working on a genetically stable version of the oral vaccine but only more recently.

By contrast, in the early 2000s, the Gates Foundation pursued thermostable versions of many existing vaccines that required storage at low temperatures. The effort largely came to naught because breaking free of the vaccine cold chain required a thermostable version of every vaccine, with little or no benefit from converting just a few.

"Did you help that kid?"

The foundation's Lonsdale asserted that the global polio program "has always been concerned about VAPP." However, action on that decades-long concern has only come recently: "Due to the progress against WPV [wild poliovirus], VAPP is one of the major drivers in the 2013-2018 Endgame Plan to stop all OPV use by 2019," according to Lonsdale. Although VAPP is a driving concern, use of the live vaccine for a year after eradication of the wild virus means the last case of polio paralysis is likely to be caused by the oral vaccine.

The Gates Foundation hints that others have responsibility for choosing the two-edged sword of a polio vaccine that can cause polio: “for a more historical look at the history of polio vaccine policy, best to contact CDC or WHO,” Lonsdale suggested.

Years ago, Bill and Melinda Gates showed their children a documentary about polio. The kids asked about a crippled boy in the film: "Did you help that kid? Do you know the name of that kid? Well, why not?" Melinda answered "We don't know that boy, but we're trying to help lots of kids like him." Bill reportedly added: "I'm in wholesale. I'm not in retail!"