A new paper suggests drug-resistant malaria might be present in Angola, perhaps brought there by an annual flow of some 40,000 Vietnamese migrant workers. Pockets of drug-resistant malaria, first found in Cambodia, now spot much of Southeast Asia, including Thailand, Vietnam, Myanmar and Laos. The expanding front comes despite containment efforts, begun in late 2008, aimed at preventing spread to Africa which already has the world’s highest malaria mortality.

A 58-year old Vietnamese construction worker returned from Angola after three years to his malaria-free village in Nam Dinh Province. Four days later, malaria symptoms appeared which went undiagnosed and eventually resulted in hospitalization. But artesunate, the frontline, fast-acting anti-malarial given to the patient, scarcely dented the number of teeming parasites. Even in severe malaria cases like this, patients usually begin to get better in just one day because artemisinin-based drugs act so quickly. (The patient also received the slower acting clindamycin to eliminate any parasites surviving the artemisinin onslaught, a combination approach meant to prevent drug resistance.) 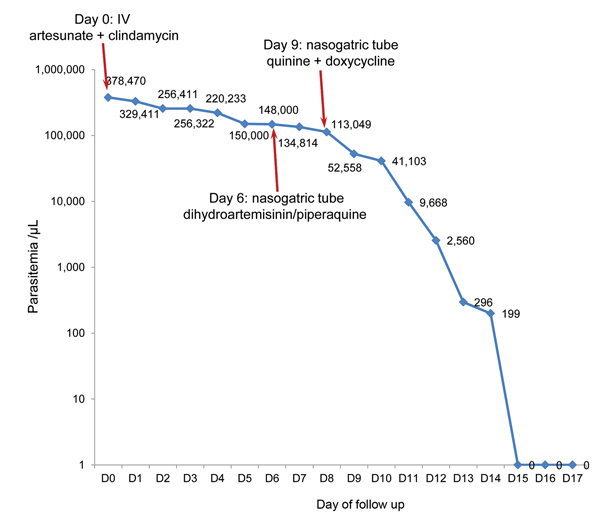 Switching to a different combination of dihydroartemisinin and piperaquine also failed to knock down parasite levels. Only when subjected to quinine and doxycycline did malaria subside, allowing the once-endangered patient to return home about one month after admission.

The strength of resistance to the frontline artemisinin-based drugs seems considerably greater than that seen in Southeast Asia. As a rule of thumb, researchers suspect resistance if artemisinin doesn’t fully eliminate parasites after three days in cases of “uncomplicated” malaria. The Vietnamese patient’s severe malaria makes comparisons problematic. Still, Nick White, of Mahidol Oxford Tropical Medicine Research Unit, has "never seen such resistance, even in Cambodia." White, other researchers and the World Health Organization (WHO) are withholding final judgment as to whether this single case means artemisinin-resistant Plasmodium falciparum malaria is now present in Angola. According to White, “No, this doesn’t mean there is resistance in Africa—there may be but you need more than this.”

White raises the possibility that parasites actually killed by artemisinin might have remained in the patient’s blood, giving an appearance of resistance. Pascal Ringwald, WHO lead for the drug-resistant malaria containment effort, further explained: “the hyperparasitemia (10%) associated with insufficient drug blood levels could explain the extremely slow clearance after artesunate treatment...” Christopher Plowe, Howard Hughes Medical Institute investigator and professor at the University of Maryland, notes that “many factors other than intrinsic parasite resistance affect the treatment outcome, including immunity, fluid dynamics, pharmacokinetics and so forth.” But Plowe concludes: “This did look more like bona fide high-level resistance.” Continued Plowe:

“This is deeply worrying. It is just one case but the evidence of resistance is pretty good. It seems plausible that artemisinin-resistant parasites were carried to Angola from Vietnam and then locally transmitted among these migrant workers.”

How has it been missed, particularly if resistance is so strong? “Bit odd no one has noticed this before if this is a focus of the most artemisinin resistant parasites in the world,” observed White. Reports from Angola to WHO in 2013 found no evidence of resistance. There was “No sign of delayed clearance and 100% dihydroartemsinin-piperaquine efficacy,” according to Ringwald, who added that “Data were validated by CDC Atlanta.” However, Ringwald acknowledged that “the studies were not performed in the same province,” Luanda Sul, suspected as the origin of the drug-resistant malaria. The WorldWide Antimalarial Resistance Network (WWARN) has no data on Angola. WWARN is working on a study of three-day parasite clearance rates in Africa based on data from 15,000 patients, but fewer than one hundred are from Angola and come from a 2003 study in Kuito, well outside Luanda Sul province.*

A missing piece of the puzzle is whether malaria parasites in this case exhibit mutations in the K13 gene, a biomarker associated with artemisinin resistance in Southeast Asia. The status of such a test is far from clear. According to Ringwald, “It is not a WHO study and it not under our control,” who notes that the case occurred over a year ago. Conceivably, there are no samples to test. The corresponding author of the study did not reply to an email inquiry.

Ringwald downplays the importance of the case and asserts that “Artemisinin resistance is already reported in Africa.” But while mutations in K13 have been reported, clinical resistance in Africa has not. Also, the mutations reported there so far might merely be polymorphisms that are not part of a genetic network that confers resistance to artemisinin.

While Ringwald expressed skepticism about the Vietnamese case, “Nevertheless, we are investigating with CDC Atlanta in Angola if K13+ is also present like many other countries.” Further, in order “to reassure everybody we will specifically conduct [a study of parasite clearance rates] with dihydroartemisinin-piperaquine in the same province,” Luanda Sul .

*This post has been updated. WWARN's study of three-day clearance in 15,000 people previously was said to have no data from Angola. The study includes 93 patients from Kuito, Angola in 2003.